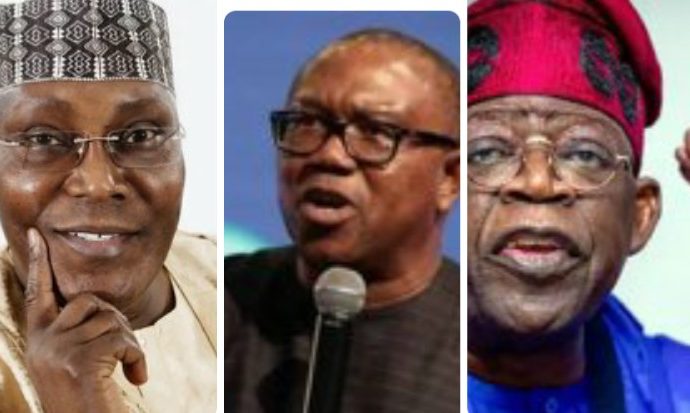 A political analyst, Jide Ojo has picked holes in the manifestos of Peter Obi, Abubakar Atiku and Ahmed Bola Tunubu, the three major contenders for Presidency in the February 25th 2023 elections.

Jide spoke when he appeared on Channels Television’s Politics Today on Tuesday, monitored in Abuja.

He revealed that the manifesto of the Candidate of Labour Party (LP) in the race, ‘brings a fresh perspective” into the campaigns.

But, assuming without conceding, he becomes a president of Nigeria without a support base in the National Assembly, the Executive arm of Government may not have a smooth sail with the Legislature during his tenure in office.

According to the analyst, “It brings a fresh perspective, this is his manifesto but assuming without conceding, he becomes a president without a support base in the National Assembly, his talking of submission of Executive base and all of that.

“Just imagine if the All Progressives Congress (APC) retains the position of Senate, House of Representatives, lost the Presidency then you have a president like he ruled in Anambra, the majority of the State House of Assembly were Peoples Democratic Party (PDP) and he was All Progressives Grand Alliance (APGA).

“But he was able to get things done but at the national level, it may not be that easy no matter what you want to do; You can’t run Presidency as a sole Administrator. He (Obi) needs the synergy of the three tiers and arms of government to get things done”, he said.

Continuing, Jide, described the manifesto of the PDP Presidential Candidate, Atiku Abubakar promised to remove 10 million Nigerians out of poverty as a drop of water in the ocean.

The political analyst, wondered why politicians are always talking about bringing out ten million Nigerians out of poverty out of the over two hundred million poor Nigerians.

He said, “The presidential Candidates didn’t write the manifestoes themselves, they possibly constituted Committees to do that for them”.

Taking a view at Atiku’s manifesto having being a successful business man, Ojo said, “Atiku is a business octopus, He (Atiku) has factories, real estate, education, one of the foremost private Universities in Nigeria”.

Commenting on the strength of Ahmed Bola Tubunu, APC Presidential Candidate, the political analyst, said Nigeria ruling party (APC) takes credit for the many jobs it has created in the agricultural value chain, emblematized in the anchored borrowers’ programme, and support to Micro, small and medium enterprises (MSMEs).

But on the flip side, according to Jide, “how many jobs have been lost in the course of gaining, so if you gain one million and you lost three million. And you’re looking at only the credit, you should also look at the debit?”.

“Manifesto is actually your barometer, it is the barometer in which you measure the internment, the roadmap, the blueprint of what you intend to do, how you want to move us from point A to point B, from consumption to production”. Why talk about Tinubu’s manifesto?

Jide further noted that there should be a connect between APC as a party and the Candidate’s manifesto, there should be synergy, and continuity in the implantation of ongoing projects of Buhari administration, stating that “If Ahmed Tinubu wins the election, will there be continuity? or they will be disconnect?”.