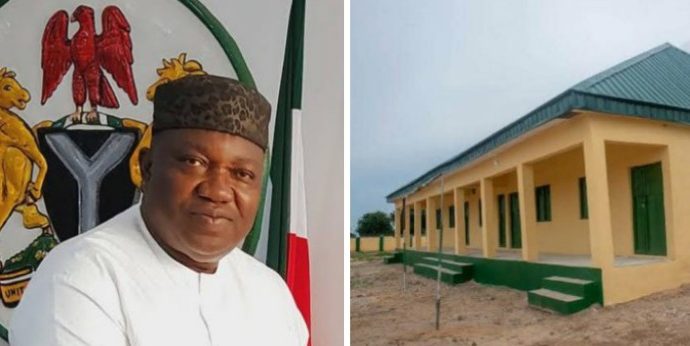 A witness account told our Correspondent that the Principal was acting on the directives of the State government, which had  earlier directed that government would not take it kindly with any politician or political party that deface government school walls with campaign posters.

Governor Ugwuanyi,who is the Peoples Democratic party Senotorial Candidate for Enugu North Senatorial zone in the February 2023 National Assembly election, according to opposition political parties, is currently fighting his last political battle, following his envisaged wind of political change since the beginning of his campaign tour of the Zone

TheNewspad gathered authoritatively that the people of Enugu North are working against the ruling peoples Democratic party in the upcoming election following her general believe that Governor Ugwuanyi’s performance in the last seven years and some months in his  Senatorial zone, is abysmally poor and unacceptable to the electorate.

The  students of the school who spoke to our Correspondent, said a PDP chieftain in the locality reported the Principal to the governor because the Principal refused his agents to deface the school fence with  PDP campaign posters.

The students however threatened that if their Principal is not reinstated immediately, they would embark on protest.

The aggrieved students of the school, described their principal as humane and hardworking, warned that this exam period is not the best time to play politics with their future academic career.

But political watchers believes that Governor Soludo is working against the 2023 lgbo political agenda of producing the next president of this Country.

Also in Enugu State, there this general perception that the Peoples Democratic Party don’t allow others political parties campaign posters, while posters of the PDP Governorship Candidate, Peter MBA, Governor Ugwuanyi and others are conspiquosly placed at every strategic places.

But, other political posters are found sparingly in some isolated places.