Why Rivers govt dragged Amaechi, Cole to court, by Wike 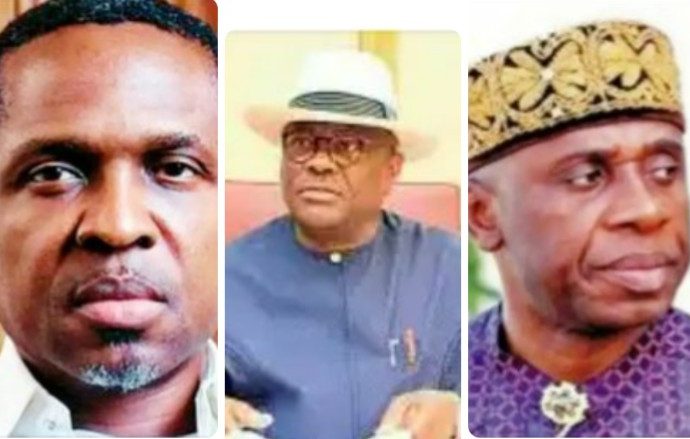 Nyesom Wike, Rivers State governor, says the State government is currently in court with his predecessor, Chibuike Rotimi Amaechi and Tonye Cole, Candidate of the All Progressives Congress (APC) in the 2023 governorship election in the State, over alleged looting of public funds in the State, running into billions of Naira.

Cole, is a strong ally of Amaechi, former Minister of Transportation and two term Governor of the State, while Wike the incumbent governor is a member of the Peoples Democratic Party (PDP).

The Governor made the allegation while addressing a crowd of party faithful at the Kelechi Nwogu Legacy stadium, venue of the campaign flag-off rally of the Rivers State PDP for Omuma Local Government Area on Monday.

According to him, “The money that should have been used to develop Omuma and some other Local Governments of Rivers State was siphoned by Tonye Cole and his master. That’s is why we have charged them to court because we will not allow anybody who stole our money to come to power through backdoor”.

Wike said the likes of such persons should not be entrusted with public funds or preside over the State, noted that despite his administration being critical against the federal government, they still adjudged him as the best in infrastructure delivery.

The Governor told Omuma people that Rivers State cannot be intimidate, no matter the gang up and urged them to stand firm, while supporting the bid to protect the State.

“Nobody should be afraid of whatever is going on in the country. We cannot be intimidated. Nobody can take away this flag away from us. We are not second class citizen to anybody and we must continue to stand firm and make sure our state is protected”, he said.

He also enjoined eligible voters across the State who are yet to collect their Permanent Voter Cards (PVCs), to collect it within the stipulated period and cast their votes for the PDP governorship Candidate in the State, Siminialayi Fubara.

On his part, Fubara, appealed to Omuma electorates to gear up and secure what the party and consolidate on the gains of the current administration in the State.