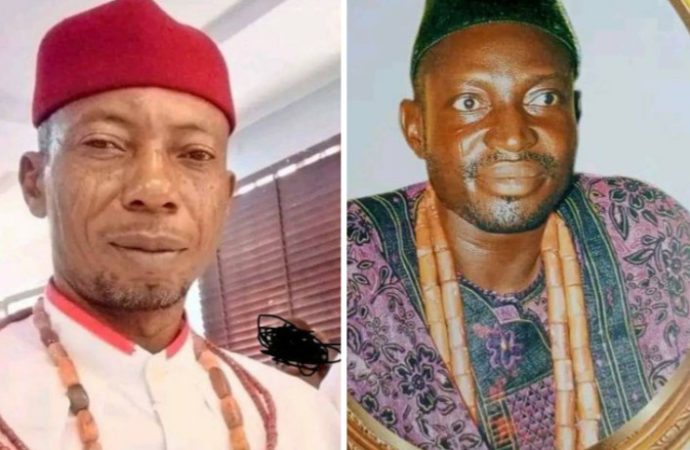 The Onogie of Igueben in Igueben Local Government Area of Edo State, HRH. Ehizogie Eluojierior I, has berated detainees including two Chiefs undergoing trial over Igueben train station attack that occurred in the locality on January 7, 2023.

Recall that security operatives had rescued 20 passengers kidnapped while awaiting the train to Warri, Delta State, but, unfortunately, in the process, a police officer attached to the Police Command in Edo State, DSP Michael Adams, lost his life in a successful rescue operation of some kidnapped victims.

The eight detainees, comprising one traditional ruler of Udo Clan, Friday Amenbadge Imadojemu (53) Chief Ibhadin Hamilton (59) and six others, ceded communal land to criminal gangs for attacks, according to intelligence reports available to the State government, were accused of conspiracy, and kidnapping.

Speaking on a Pidgin English Radio programme in Benin City, Ehizogie I, said he also heard the news of their arrest.

“I am not involved. As the Onogie of Igueben, my town is the headquarters of the Local Government. So, when Igueben is mentioned, some people get confused.

“There are many towns in Igueben. My role is to supervise other traditional rulers in the area and ensure the area is secured.

“I got all my hunters and vigilantes for the battle when the incident (kidnapping) occurred. We were lucky that those security people confirmed that I was the first to organise security men to fish them (criminals) out”, he said.

When asked why some of the traditional rulers in the area accepts cows as gifts from herders in exchange for grazing fields, the Onogie of Igueben said, “we have the security report at the Local Government Council, which is supposed to implement it.

“As the Onogie of Igueben, it is not my duty to compel the Government to do the needful and take action against perpetrators of crime. I think that their cup is filled. So, nemesis is catching up with them.

“I know that some people have a vast forest that they gave to these herders outside Igueben town within the Local government”, according to the Onojie of Igueben, as part of the measures to tackle crimes in his domain, a security meeting with stakeholders in the locality.

“While at the meeting, I advised them to shun crime. I also advised them not to allow killer herdsmen to enter the town. The ones that we have known from time in memorial are those one that deal on beef and other meats are the ones we know”, the traditional ruler said.

Also speaking, Felix Imoisili, the Ojomo of Igueben and former chairman of Igueben Local government Area, described the incident as shocking and sad.

He alleged that “there is apprehension in Igueben, following reports that some of the arrested suspects have been released from police custody”.

ALSO READ:  Why journalists should be familiar with electoral Act — INEC

Imoisili, charged the State government and security agencies in the State to be diligent in the ongoing investigation and track down criminal elements in the area.

He said, “I want to believe that the security people are also taking action. And I am a lawyer. Investigation should be conducted properly so that you won’t go and punish a man for doing any wrong.

“I am of the opinion that investigation should be conducted properly so that anybody found wanting should be dealt with according to the land. There is no question of sentiments. This has to do with the lives of people who ate going through pains and agony”, he advised.