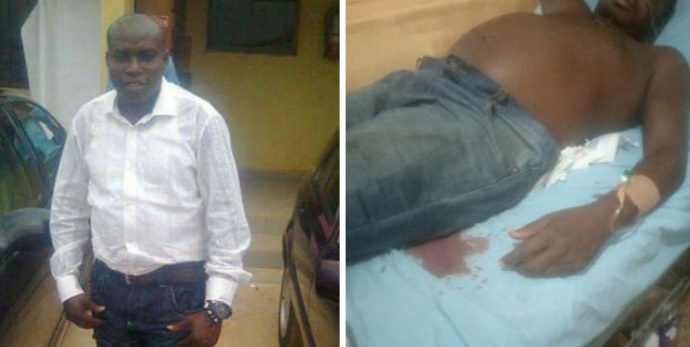 An artisan identified as Isaiah Omoruyi, 45, has reportedly died from torture he allegedly received from the Nigerian Airforce personnel on the orders of flight Lieutenant N.S Danshi attached to the Air Force Base in Benin City.

The tragedy occurred on January 12th 2023, few days after Omoruyi, Aluminium fabricator, was hired by Emma Osemwegie, 29, who operates a Body/Beauty Enhancement shop on 14 Stadium Road, opposite Samuel Ogbemudia Stadium in Benin City.

His tasked was to fix two glass doors on January 6th 2023 for the sum of N25, 000. But destroyed one of the glasses by default. The development which prompted the shop owner to seize the work tools that the artisan brought to the site.

Suddenly, Omoruyi, without any mobilisation fee for the job, returned back on January 12th with a receipt showing evidence of payment that he made to order for the glass door to enable him retrieve his seized working equipment.

The equipment, which was in possession of the artisan, according to a close family source, had accumulated daily charges, but his plea to retrieve the equipment from Emma Osemwegie, fell on deaf ears.

The disagreement however degenerated when a plain clothes female Airforce Officer identified as Jovita Ebosele serving in Port-Harcourt, Rivers State suspected to be a girlfriend of the operator, engaged the artisan in a conversation that however led to a assault.

Jovita Ebosele who was recruited into the service barely three years ago, however, it was gathered, made a call to the head of Airforce Police, flight Lieutenant N.S Danshi who immediately sent his men down to the scene where he was physically harassed by the officers before he was bundled into a waiting vehicle to the office of N.S Danshi where Omoruyi was brutalized.

TheNewspad reliably gathered that the victim was released and asked to go home by the officers who drilled him for hours.

He was thereafter hospitalized when it was discovered that he suffered broken rib cage which punctured his lungs according to a medical report.

The deceased, Omoruyi and father of two children including a 2-month-old baby girl, died on January 18th 2023 at about 11.30pm after several attempts by the doctor to save him at the University of Benin Teaching Hospital (UBTH).

Meanwhile, Emma Osemwegie and female Airforce officer who are alleged accomplices to the crime, have been arrested by the police attached to Aideyan Police Division.

A source at the Division told TheNewspad that N. S Danshi and other top officers, took Jovita Ebosele linked to the alleged murder on bail.

The source said they were asked to report at the police station on Friday January 19th, 2023, but the suspect is yet to turn up at the station at the time of filing this report.

Elder brother of the deceased, Mr. Godspower Omoruyi, a retired Senior police officer, has appealed to police authorities to transfer the case from Aideyan Police Division to the Department of Criminal Investigation Department of the State Police Command for accelerated investigation.

The family source added that his deceased brother would get justice as all the culprits including the AirForce officers in the case must be made to face the full wrath of the law for alleged murder.

“He (Isaiah Omoruyi) said was like every normal artisan eking out a living. In the course of that he broke a glass door which he had already ordered for.

“Why would anyone in the name of the Nigerian Airforce use his uniform to oppress an innocent and defenceless individual thereby leading to his death.

“No where in the Constitution gives anyone such rights to take another person’s life . This case is between the federal government and the family of the deceased”, Omoruyi’s elder brother stressed.

Contacted, spokesman of the Nigeria Police Command in Edo State, SP. Chidi Nwabuzor, said he yet to be briefed on the incident.