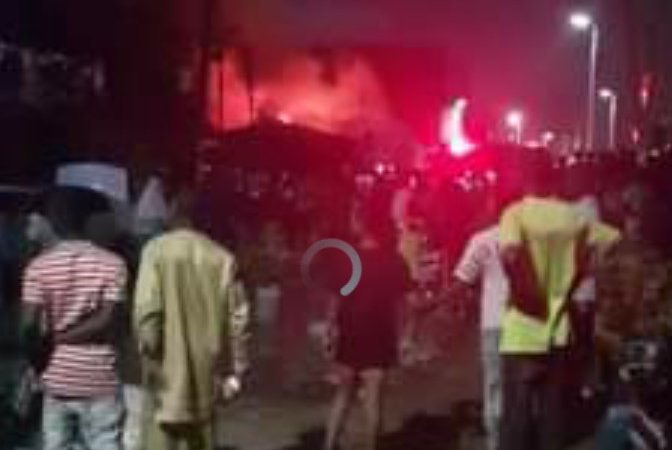 Lagos street market at the King square in Oredo Local Government Area of Edo State has been engulfed by midday fire.

On Saturday fire incident occurred six weeks after a fire razed a portion of the market, leaving 25 shops burnt.

The market located about 100 metres from a fire station in Benin City, the State Capital.

Bystanders watched helplessly, traders, scavengers and those living close to the market could not savage goods in the inferno whose cause is yet to be ascertained.

They watched with lamentation as thick smoke from the blaze, billows into the air; Just as stocks worth millions of Naira were destroyed before the fire was out out by the Fire Service which had complained of water shortage.

One of the owners of the affected Building housing over 20 shops and warehouses, Mrs. Eleghon, populay known as ‘Madam Lagos’, was said to have collapsed arising from the shock when the learned of the disaster.

Madam Eleghon who had lost one of her properties in the previous fire incident that occurred in the market, was said to have been admitted to hospital for immediate medical attention.

It was gathered before the arrival of the fire Service truck in the area, one of the Buildings at Jegede junction in Ibiwe Street, has been razed by fire.

Recall that the Edo State government had blamed All Progressives Congress (APC) for the fire incidents at markets in Benin Metropolis.

But, in a swift, reaction by the main opposition party in the State, denied the claims and berated the ruling Peoples Democratic party (PDP) government for lacking the will power to tackle crimes and for been nonchalant to the plights of victims of fore disasters in the State.

Over six markets including Uwelu and Evbareke spare parts markets had been burnt across Oredo, Egor and Ikpoba-Okha Local Government Area of the State since the past seven years.

TheNewspad reports that despite repeated assurances by the Local and the State government, non of the burnt market has been built as at the time of filing this report.