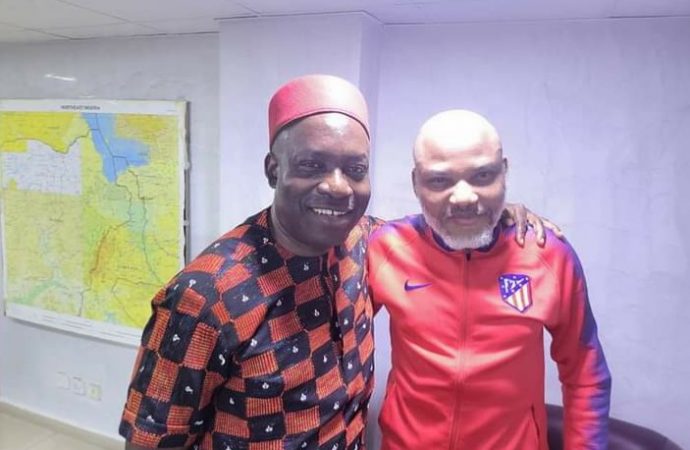 The governor of Anambra State, Chukwuma Charles Soludo says his
that the letter requesting for the release of Nnamdi Kanu, leader of indigenous People of Biafra (IPOB) will get to the Attorney-General of the federation, Abubakar Malami, in a matter of days.

Kanu who was charged with treasonable felony, terrorism and other related offences, is being detained in Department Security of Service (DSS) custody in Abuja, after he fled Nigeria, rearrested and deported to face his trial in 2021.

Christian Aburime, the spokesman of the Governor in a statement, said Soludo insisted that for the peace and security of the South East, there is need for stakeholders to rally round the table to discuss, to which Nnamdi Kanu is a critical component.

Recall that the Governor made
a verbal request, demanding for the unconditional release of the Kanu as directed by the courts or released to him to act as his surety, while speaking during the All Progressives Grand Alliance (APGA) Campaign Flag-off at Dr. Alex Ekwueme Square in Awka.

In a swift reaction, IPOB urged Soludo to compel and persuade the Federal Government to release Nnamdi Kanu unconditionally.

The group insisted that its detained leader, Kanu has no case to answer before the Nigerian court, adding that such does not need to be freed on bail.

Aburime in the statement said Soludo appreciated President Muhammadu Buhari for his efforts on security in the South East, especially his kinetic approach, maintaining that it is now time for some home truth to be told, which is that the non-kinetic approach to solving the problem of insecurity in the region, should be explored.

While calling on stakeholders in the region to rise up to the occasion, the Governor dismissed insinuations from some quarters that the demand he made is a political statement, expressing genuine concern about the present condition of the region for a sustainable future is not attainable without sustainable security.

Governor Soludo, according to the statement further stressed that the APGA is the third largest political party; a home and future of true progressives in the Country and maintained that in the forthcoming election in February and March, the party will be competing across board, to win.

Commenting on whether he has a Presidential ambition, Governor Soludo wondered why people left the issues addressed in his letter to start making insinuations, stating that only God knows what will happen in future and not man, just as he emphasized that the letter was not written for today but for history.

In January 2022, Justice Benson Anya of the Abia State High court, ordered the federal government to pay the leader of IPOB, the sum of N1 Billion over infringement of his fundamental rights.

But the court of Appeal, Abuja Division upheld the application by the federal government which thereafter sought a stay execution of the release of Kanu.

Justice Haruna Tsamani who presided over a three-member panel of justices held that it would be proper to await the appeal before the Supreme court.

Mike Ozekhome SAN, had also demanded the unconditional release of the leader of Indigenous People of Biafra, Nnamdi Kano, predicting that his detention will worsen insecurity in the South eastern part of Nigeria.