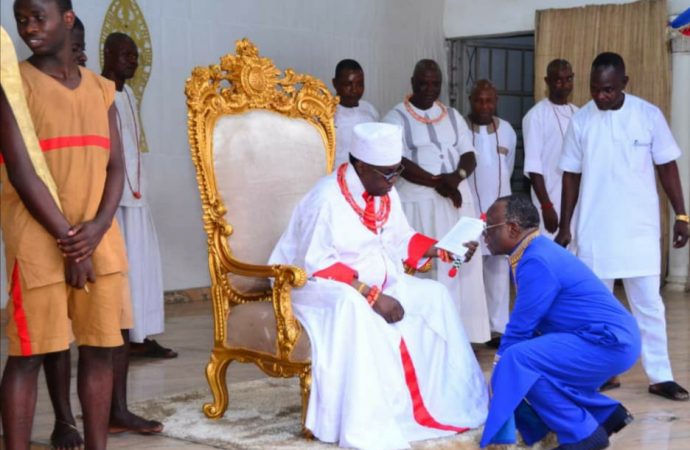 Recall that security forces on Sunday rescued 18 our of 20 people who were kidnapped by a criminal gang at the station on Saturday January 7, 2023.

Oba Ewuare II disclosed this at the 2023 universal week of prayers by Benin City Christians Community which was rounded off in his Palace in Benin City, where he prayed God to intervene on the security in Nigeria.

He thereafter sent prayers and condolences to members of the family of a policeman, DSP. Michael Adams who lost his life while doing his lawful duty after a successful rescue operation of some kidnap victims in Igueben.

The monarch, commended security agents and the federal and Governments for the rescue efforts, interceded to God and his ancestors to avert bloodshed in Edo State in Nigeria, before, during and after the 2023 general elections.

“We thank God that some persons who were kidnapped at the train station have been rescued alive by security agents. We also send prayers to the policeman who was said to have been killed while doing his job.

“We pray God to comfort his family and give them the wisdom to overcome this loss and grief. It shall be well with the family.

“We should also pray to God to guide our leaders in Edo State. God should use them to promote peace and do the right things and develop the Kingdom. Nobody is perfect”, Oba Ewuare II said, ” we pray that our democracy will not be turned into ‘democrazy’, according to late Fela Anikolakpokuti.

While calling on Nigerians to intensify prayers for a peaceful, free and fair 2023 general elections in Nigeria, the monarch, charged the various religious adherents to love one another and support development of the nation.

The Guest speaker and immediate past President of Pentecostal Fellowship of Nigeria, Reverend Dr. Felix Omobude acknowledged the unique roles tradition in the Bible, declaring that “God sets up Kings”.

He eulogized the Oba of Benin for his thoughtfulness and uncommon commitment in restoring values, Customs and tradition to the society.

The Cleric who dwelt on Apostle Paul’s administration to Timothy from 1 Timothy Chapter 2, explained that “we are told in the Bible that the King that Judged righteousness, his Kingdom shall live forever”.

He said, “Your Majesty, you have done so well in restoring our values. You restored sanity to our youths. You broke land grabbing that life unbearable for our Communities.

“You have been thoughtful. I watch my television and I see different Communities with issues coming to your Palace for adjudication. It takes the wisdom of God to handle such complex issues.

“I am a thorough Benin man. My patents taught me values before I read my Bible.
“Prostitution and other social vices and alien to us”, Omobude said.

Earlier in a remark, the Chairman of Benin City Christians Community, Apostle Godspower Ogbonmwan, explained the essence of the year prayer in Oba Palace, and thanked God for the good work he has being using the Oba to beyond Edo State, prayed God to strengthen him, his Palace and the Royal family.

Reverend Benjamin Emofomwan and Deaconesses Christiana Omwanghe, took their Bible Reading from Job Chapter 42 verse 1 to 11 in both English and Edo Languages, while the Triumphant choir of Christ’s Apostolic church of God in the State, rendered melodious songs during the prayer session, which was attended by Benin Chiefs, Dukes (Enigie), and other palace functionaries.