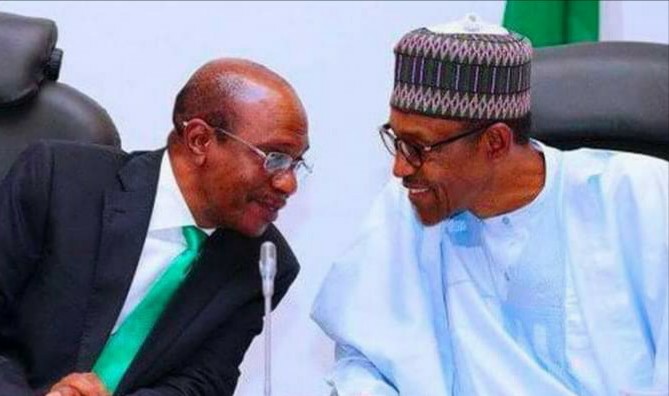 Femi Falana (SAN), human rights lawyer has kicked against President Muhammadu Buhari silence on the allegations of terrorism financing levied against the Governor of Central Bank of Nigeria (CBN), Godwin Emefiele by the Department of State Security Services (DSS).

Recall that DSS approached a the Federal Capital Territory High Court Abuja, and sought for an order to arrest the Governor of CBN.

But the court presided over by Justice Maryam Hassan, barred DSS from arresting, inviting, or detaining Emefiele declaring the terrorism allegations against the CBN governor by the DSS as vindictive, callous, oppressive, void and of no effect.

Speaking on Channels Television’s Sunday Politics, Falana described the situation as embarrassing, noting that this can only happen in a Banana Republic where the governor of the apex bank would be accused of a grave offence of terrorism financing.

The Human Rights lawyer said, “The President of the Country has not intervened; either to call the state security to order or to call Mr Emefiele to return to the Country or be fired”.

While calling for the after of the Governor of Nigeria’s apex bank whenever he returns to Nigeria, Falana declared that Emefiele is not one of those constitutionally entitled to immunity in the Country.

Falana said, “I can say without any fear of contradiction that Mr Godwin Emefiele is not in Nigeria; he hasn’t returned to the country because he has been declared wanted by the state security services”.

“Has the government considered the enormous implication of the effect of a wanted governor of the central bank on the economy?

“I am completely flabbergasted that the President of the country has not intervened; either to call the state security to order or to call Mr Emefiele to return to the country or be fired”, the senior lawyer said.

Speaking further, Falana recalled how Sanusi Lmido Sanusi who was Emefiele’s predecessor, was also accused of terrorism financing in 2014 but won the case.

“These guys play on our collective intelligence because they know we are very forgetful. In 2014, his (Emefiele’s) immediate predecessor, former Emir of Kano, Alhaji Sanusi Lamido Sanusi, was equally accused of terrorism financing.

“In the same way, he (Sanusi) also travelled out of the country to attend a meeting with the governors of the central banks of West Africa in Niamey, Niger Republic.

“As soon as he landed in Lagos, he was arrested, his passport was seized,” Falana said.

Falana stated that Sanusi won the case and the court awarded N50m compensation in favour of Sanusi.

He stressed that the allegation of terrorism financing against Emefiele should not be dismissed.