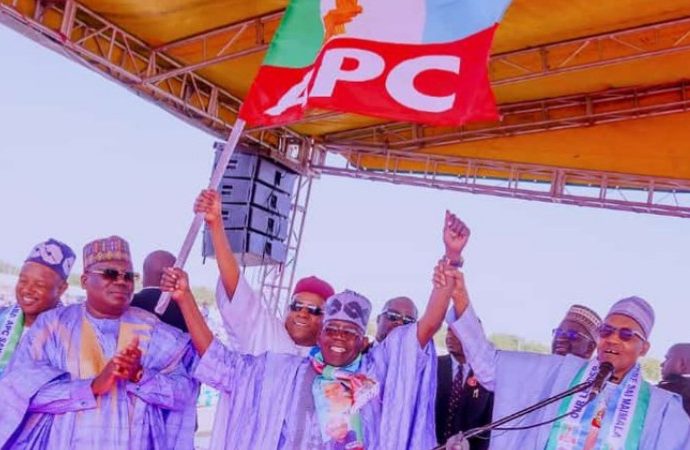 The Senate President, Senator Ahmed Lawan has predicted victory for the Candidate of the All Progressive Congress (APC), Ahmed Bola Tinubu in the February 25, 2023 Presidential election.

He declared that Nigeria will continue to experience progress when President Muhammadu Buhari handover the reign of power to Tinubu this year.

Femi Adesina, presidential spokesman in a statement, quoted Lawan to have said this on Tuesday at the presidential campaign rally at August 27 Stadium in Damaturu, Yobe State Capital.

The Senate President, boasted that APC would win every contestable seat in Yobe State, because President Buhari has done wonderfully well in the seven and half years he has been in office.

According to him, “We are all Buharists and that Buharism- integrity and love for country-will continue when you (President Buhari) hand over to Asiwaju”.

He accused PDP of destroying Nigeria during its 16 years in power, saying ‘‘they should be ashamed of themselves and have no right to go around Nigeria seeking for votes.’’

On his part, the Presidential Candidate of APC, Bola Ahmed Tinubu, stated that President Buhari “government is a government of progress, integrity and honesty,’’

He urged Nigerians to reject the lies peddled by the opposition parties on the Buhari-led administration for the return of peace and normalcy in the Northeast region of the Country.

Tinubu also promised that his government would turn the region into the Agro-allied processing Centre of Nigeria.

‘‘We will give you good jobs that you can depend on. Agriculture will come back. Hunger will go away. We will give you what is necessary, consumer credit to build houses and roofs over your heads”, he said.

The APC Presidential Candidate also promised to put an end to perennial ASUU strikes history, assuring that undergraduates will not need to spend extra years in the University beyond the stipulated time of study.

He further urged the people of Yobe and Northeast Nigeria to vote APC candidates in the general elections, assuring that Nigeria economic prosperity will blossom under his watch.

Addressing party faithful, President Muhammadu Buhari said a vote for Tinubu and his running mate, Kashim Shettima, would guarantee the sustenance of progress made in the security, economy and education sectors of the nation.

He also said the APC-led government is more than ever before energized to defeat whoever threatens the unity of Nigeria; Just as he appealed to parents and guardians to encourage their children to acquire formal education.