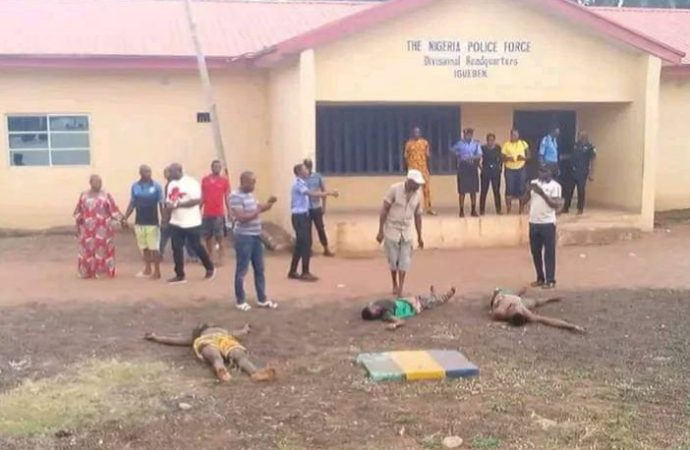 It was leant that the quartet, was neutralized by angry mob in random attack the house of an American based Nigerian last week.

Witnesses said the hoodlums, broke into the apartment at night after the owner of the property had travelled abroad.

It was further learnt that one of the invaders gained access into the house after destroying the Plaster of Paris (POP) ceiling, with the intent to loot property in the house.

Apparently sensing danger, one of the make domestic staff who was at home, raised alarm that hoodlums have struck.

This prompted braved youths in the neighbourhood to foil attempts by the hoodlums to with loot property in the house.

It was further learnt that after a thorough search by the mob, the invaders were apprehended and brought down by four members of the criminal gang who threw caution to the wind.

A member of the criminal gang, escaped with injury, a terrified Community leader said, bodies of the invaders were taken away by police personnel at Ugbor Division, Benin.

Spokesman of the Nigeria police Command, SP. Chidi Nwabuzor, is yet to comment on the incident.