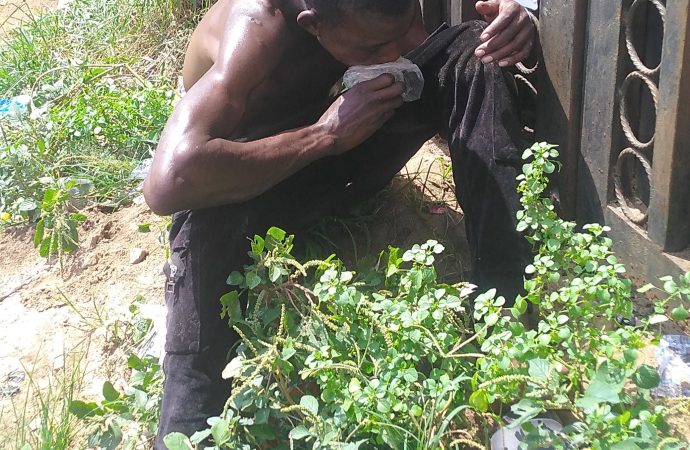 A suspected pick pocket who was arrested and handcuffed opposite the Central Bank of Nigeria (CBN) annex on Akpakpava road in Oredo Local Government Area of Edo State, has been set free.

The unidentified middle-aged man, was said to have been arrested by security operatives and chained to a mental gate opposite the CBN annex on Friday afternoon.

It was learnt that bystanders and traders around the premises made jest of the dark in complexion suspect who was in black weird trouser and abandoned to his fate under the scorching sun for hours.

Investigation by Correspondent revealed that the suspect who bowed his head in shame during interrogation, was found eating snacks before he was allegedly set free.

One of the traders simply identified as Mr Edwin who deal on used clothes also witnessed the scene.

He alleged that the notorious pick pocket is well known to security agents and traders in the area.

Edwin alleged that the suspect had been arrested and set free in the past for alleged criminal offences at the King square and environs.

Speaking on the incident, the spokesman of the Nigeria Police in Edo State, SP. Chidi Nwabuzor, said the pick pocket might be a petty criminal.

He stated that the incident is yet to be reported at the Police Command in Benin City.

According to him, Those ones are petty criminals. Those who handcuffed him might be guards attached to CBN.

“That kind of cases are usually reported at the Division. They may might have done that to punish him and thereafter let him go”, he said.