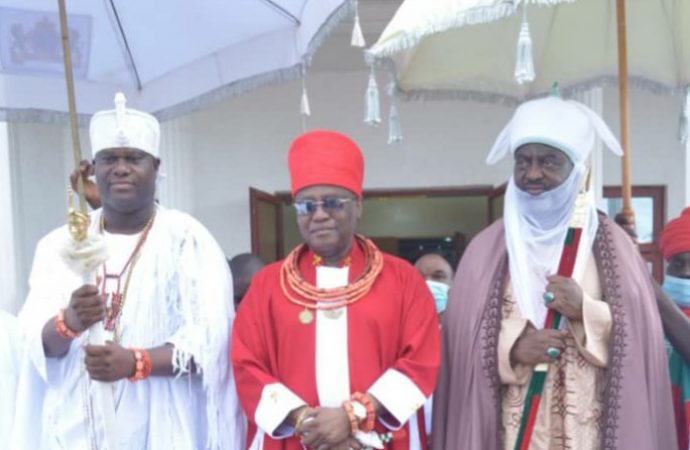 His Royal Majesty, Oba Ewuare II, Oba of Benin, CFR has described the call by the Nigeria Union of Journalists, NUJ, seeking roles for Traditional Rulers in Nigeria’s Constitution as desirable.

He said he shares in the sentiments expressed by members of the fourth Estate of the realm, but lamented abuse of Traditional titles by some individuals who sometimes indulge in criminal activities which are constraints that are difficult for stakeholders in Nigeria to resolve.

Oba Ewuare II made this known when the President of NUJ, Comrade Chris Isiguzo and other members of the National Executive Council (NEC) paid him a courtesy visit in his palace in Benin City, Edo State.

The traditional ruler recalled how he made a personal presentation to President Muhammadu Buhari on the need for Traditional Rulers to be accorded protection against being deposed indiscriminately by some agents of States as it is in some developed climes.

The Oba said it is embarrassing to read on various media platforms that some monarchs in Nigeria have been arrested or arraigned perhaps for behaving in such a manner that is unbecoming of a Traditional Ruler.

He revealed that if for any reason, it is possible to define who a Traditional ruler is, as defined by his father, Oba Erediauwa, in a paper that he presented at the University of Benin (UNIBEN) years ago, many self-acclaimed “Traditional Rulers” will fall by the wayside.

“You have found out that the problem we have in Nigeria is that almost everybody is His Royal Majesty, His imperial Majesty, His Royal Highness and so on and-so-forth…You also find out that Traditional Rulers are appointed and upgraded from one thing or the other. One day, somebody along the street can be picked and addressed as a Traditional Ruler.

“There are some many responsibility that go with our own Traditional institution in Benin. That is why it is easier when you are born into it and brought up into it. I do not know any other life rather than what I was born into right from childhood. This makes it a bit easier to handle responsibility.

“Even in Europe, it has not been easy for the European monarchs or the Traditional Rulers to be monarchs. In Germany, Netherlands, Russia, there were monarchs. Many lost their thrones.

Earlier, the President of NUJ, Comrade Chris Isiguzo, appealed to Governments at all level to consider allowing Traditional Rulers, to play their roles and assert their authorities especially in arresting the high level of insecurity in Nigeria.

According to him, “Whoever that is behind this insecurity must have come from a Community. And know people from their respective Communities and they can easily rein on them”.