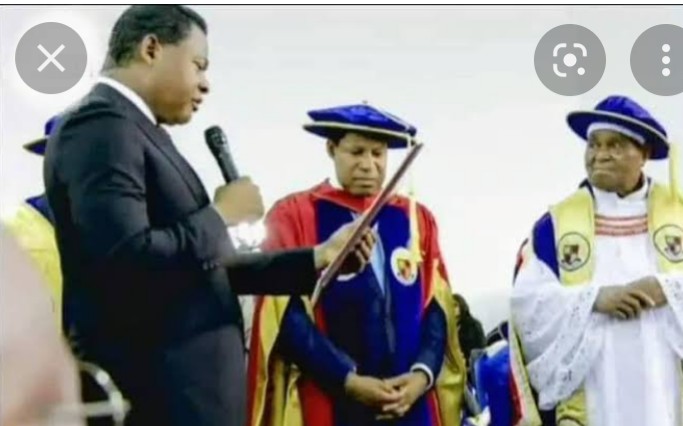 On Saturday November 12, 2022, Pastor Chris Oyekhilomen, the President and Founder of Christ Embassy Church (aka Believers Love World) was awarded an honorary Dr of Science (D.Sc) degree by the premier private University in Nigeria, the Igbinedion University, Okada in Edo State.

The award ceremony was part of activities to mark the 20th convocation ceremony of the university.

The honours were in recognition of Pastor Chris as a distinguished preacher of the gospel of Jesus Christ, not only in Nigeria, but in the global arena.

Soon, the world will be seeing his footprint in Okada. He told guests at the award Ceremony how the Chancellor of the University, Chief Gabriel Osawaru Igbinedion, the Esama of Benin Kingdom handed over to him, a large expanse of land for the propagation of the gospel.

He did not leave the guests guessing on the humility and christian virtues and mores of Chief Igbinedion.

From birth, Pastor Chris has never left anyone in doubt of his capacity and spiritual endowment.

He was first spotted at age nine when he conducted the first crusade.

There is no doubt that Nigeria has a unique history of producing some of the finest and best in different aspects of life, be it religion, science, politics academic etc.

Today, Nigeria deserves a ring-side seat for producing men and women with potential and did exploit and excelled in the gospel ministry to the extent of drawing global attention and accolades.

He stands out in this regard. A protege of the late Archbishop Benson Idahosa, who is globally referred to as the father of pentecostalism.

Pastor Chris, as he is fondly called has taken the world by storm, setting standards, redefining the christian faith and constantly increasing his knowledge of the word of God.

His evangelical exploit is remarkable as his accomplishment in ministering the word is legendary.

His father, Elder Tim Oyekhilome is one of the pioneers of Assemblies of God Church, Benin City, a leading pentecostal family in Benin City and beyond.

Of all the elements that constitute greatness, Pastor Chris has them in abundance.

For example, he is handsome, humble, intelligent, educated, a man of great and excellent character; a global evangelist and a man with high level commitment; a man filled with the holy spirit and preaches the undiluted word with boldness; a teacher and author of so many books, including Rhapsody of Realities which has been translated into over 300 languages and selling over 100, 000 copies monthly.

Pastor Chris chronicled greatness cannot be captured in one swoop. His global ministry is a testimony that he is a man of great destiny.

Though there are no scientific explanations to explain his zeal and passion for God, the demonstration of his adequate knowledge of the gospel attests to the fact that God ordained him for a special mission on earth.

This probably explained why, 22 years after the transition of Archbishop Benson Idahosa to eternal glory, Pastor Chris was handed over the personal Bible of the late Archbishop by the family.

Today, Pastor Chris has become a rare phenomenon in the christian circle.

His proliferation of miracles across countries of the world is a trend in the fulfilment of the great commission by God.