Why Catholics celebrated mass with Oba Esigie, by Benin monarch 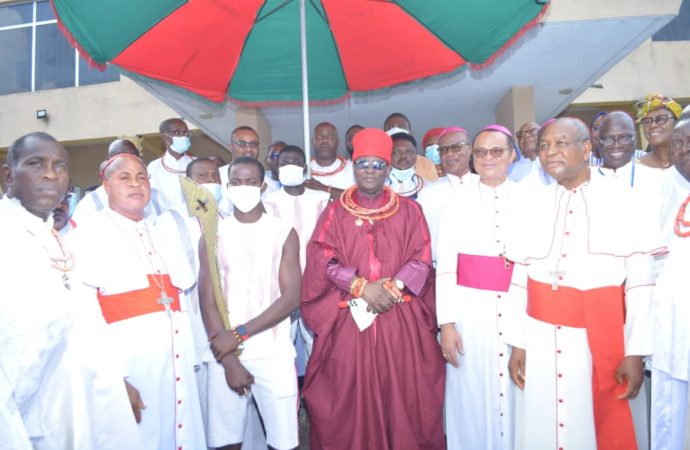 The Benin monarch, His Royal Majesty, Oba Ewuare II, CFR has explained the reason why the Catholic church celebrated mass in Oba palace in 13th Century.

The mass “was intended to bring libration to Benin Kingdom the way Christ saved humanity”, according to Oba Ewuare II during the reign of Oba Esigie who was the first Benin monarch to have contact with Europeans.

Oba Ewuare disclosed this while delivering a lecture at the 3rd National Pastoral Congress of the Catholic church in Benin City, Edo State, with the theme: “For a Synodal Church, Communion, Participation, Mission”.

While analysing the evolution the Benin Royal Court and her relationship with the early Catholic Missionaries under the famous Benin empire, now part of the Sovereign authority of Nigeria, the Oba explained that “the Catholic church uses different format to operate”, and even attempted to convert some of his forebears and himself to Christianity, but it was resisted.

The monarch said due to the cordial relationship Oba Esigie had with the Catholics, some early Roman Missionaries began to push for Christianity to become a ‘state religion in the Kingdom’, having converted, the then Benin Crown Prince Uhogua — first Benin Prince that was exposed to Western Education, but he later returned home after his father died.

But Oba Ewuare II said, apparently sensing that the move could portend danger to Benin Kingdom, some Benin palace Chiefs otherwise called ‘the Nobles’, Oliha among the Uzama N’ihinron, disagreed and resisted attempts by the Missionaries to impose a new religion they felt could sideline African Traditional Region (ATR) devotees in Benin.

Oba Ewuare II, emphasized that the bond between the Roman Catholic church and Benin Kingdom, perhaps accounts the arguments that was put forward by some adherents of the various faiths and literary scholars that former Catholic Pontiff, Pope John Paul (II) ought to have visited Benin during his tour to Nigeria, due to the historical affinity and the origin of the ‘Holy Aruosa shrine’ on Akpakpava street in Benin City, now known as ‘Holy Aruosa Cathedral’ otherwise called ‘Edo National church’ which the Oba of Benin is the spiritual leader.

“During the visit of Afonso De Viero advised the Oba of Benin to become a Christian, and promise to make his Kingdom better. Oba Esigie accepted his advice, according to Oba Ewuare II, Ohen-Olokun N’ Ughoton known as ‘Olokun Priest) at Ughoton in Benin to Lisbon in Portugal as Benin Kingdom Ambassador, while a Portuguese Ambassador along with a Roman Catholic Priest were sent in exchange on a specific assignment, to teach Oba Esigie how to write and speak the Portuguese Language.

To further strengthen the diplomatic ties between Portugal and the Benin Kingdom, Oba Ewuare II, recalled that in 1981, his father, Oba Erediauwa of blessed memory, mandated five Benin Chiefs including Chief Ojo Eguavoen, the then Osuma of Benin and Mr. Daniel Ineh to accompany him and the then Nigerian Ambassador to the United States of America and presented a Bronze gift of Oba Esigie sitting down and writing in Portuguese Language in his palace to the Management of Tempo University, Philadelphia, United States.

On his part, prelate of the church, Cardinal John Onaiyekan, aligned with the Oba of Benin that Roman Catholic Missionaries came to Benin before the Protestant Reformation began Centuries ago and thereafter prayed for a peaceful reign of Benin monarchy

President of Catholic Bishops Conference of Nigeria (CBCN)
and the Catholic Archdiocese in Imo State, Most Reverend Lucious Iwejuru Ugorji, expressed deep appreciation to the Oba of Benin for his insight delivering the lecture.

Earlier in his speech, Catholic Bishop of Benin Metropolitan sea, Most Reverend Augustine Obiora Akubeze, enjoined leaders of different inter denominations not to soundproof their hearts, but live a righteous life and resist the temptation of dominating conversation.