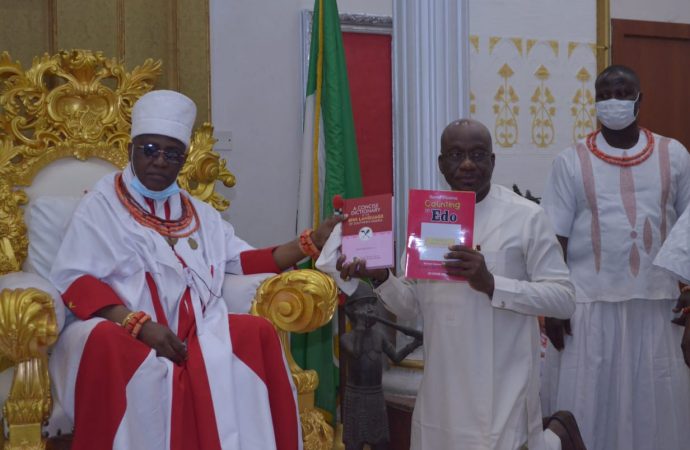 The Benin monarch, His Royal Majesty, Oba Ewuare II, has commended a team of researchers behind the applied Science research in Edo language that makes counting to infinity possible.

The teaching and learning Modules, was championed by researchers from Benson Idahosa University (BIU), with the support of their counterpart in University of Benin (UNIBEN).

Oba Ewuare II made this known when researchers at the Centre for Edo studies at the Benson Idahosa University (BIU), paid him a courtesy visit in his Palace, Benin City.

The traditional ruler who expressed excitement over the innovation, pledged his support for the group and thereafter assigned some palace chiefs to liaise with them for further consultation.

Addressing the Benin Royal throne on the ground work, the Vice Chancellor of BIU, Prof. Sam Guobadia, said the researchers were inspired by Oba Ewuare II, who charged Edo people across the world to speak Edo Language in his 2016 Coronation speech.

Speaking on the topic: ‘Counting in Edo: An autobiography of the Benin Language’, Prof. Guobadia, explained that aside from the breakthroughs in counting from elementary to advanced level, stated that the team, also made a remarkable progress in ‘autobiographic convergence’ in Edo Language since the Board was composed five years ago.

“We wish to state categorically that this innovation was inspired by your Coronation speech. In that speech, you charged all Benin men and women to learn how to speak Edo Language.

“The effort of this breakthroughs started five years ago, with the composition of the Centre’s Board, made up of eminent scholars…We are ready to share the outcome of the research work with the public as, we can now count up to infinity”, VC said.

Isibor, unraveled the puzzle behind the difficulties surrounding numeracy in Edo Language, the Methodology that simplifies teaching and leaning of the Language.

He solicited for prayers of the Benin throne, and support of stakeholders in ensuring that Edo Modules are embedded in Curricula of Primary and Secondary schools in Edo State.