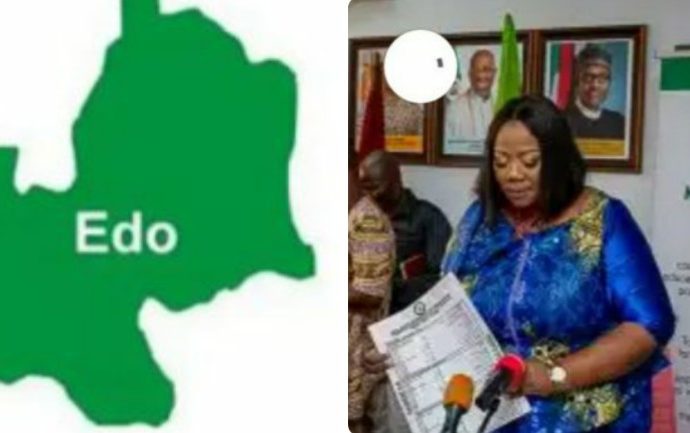 The Chartered Institute of Public Diplomacy and Management of Nigeria, says it has waived the nomination of Dr. Joan Oviawe, Edo State Commissioner for Education to become a Fellow of the body.

An official of the Institute, told our Correspondent that the award was withdrawn over alleged verbal assault and demotion of Imaguero Senior Secondary school Principal in Oredo Local Government Area of the State.

Recall that the demotion of Principal simply identified as ‘Aunt Mofe’ in March 2022 and her subsequent redeployment from the school to classroom without query, in line with Civil Service rules, drew the ire of several Nigerians online, with some respondents casting aspersions on the Government.

Multiple reports had said that the Commissioner lost her tempers when she visited the school and discovered that there was power outage during the biometric registration exercise for the West African Examinations Senior Secondary School (WASSCE) Candidates.

The outage led to an argument between the Commissioner and the demoted Principal who lamented financial difficulties in setting up the power generating set in the school.

The executive member of the Institute who did not want his name on print, “we shortlisted her name for the award to compliment her effort in repositioning the Education sector in Edo, but her nomination was withdrawn and given to another personality after the awful act of misconduct which led to the demotion of Imaguero Principal.

“This was the same Principal that was not given the opportunity to defend herself. She was punished over her inability to power a generating set, which money was of provided to buy diesel”, he said.

Unperturbed Oviawe, had in a text message in reaction to the incident, challenged the demoted Principal to disclose details of what happened.

“Why would I have a personal disagreement with a teacher? That is ludicrous. The teacher should please state what happened…”, Oviawe replied menacingly.