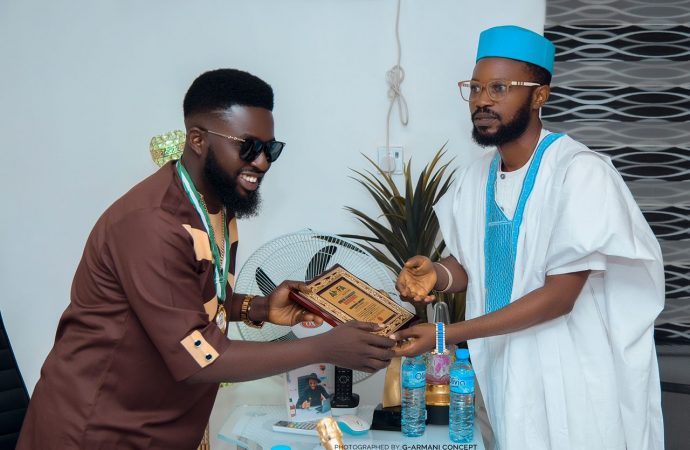 Popular Comedian and skit maker, Lawrence Osarenkhoe widely known as ‘official’ MC Casino has been inducted into the prestigious Kings and Kingdom Africa Hall of fame as an Ambassador of Cultural Ethics, values and morals, ahead of his working visit to Europe.

The stand-up Comedian was recognized for his hilarious skits and sustainable vision, loyalty and commitment to reduction of sad moments and anxiety, took the Content Creator into the wings of honour among his contemporaries in the entertainment industry.

Flattered by the his soaring success, Osarenkhoe, an Alumnus of the University of Benin (UNIBEN), renowned for his rib-cracking, MC Casino, the master of game of jokes, has become the 13th distinguished personality, joining the likes of the National Secretary/Focal Person of National Social Investment Programme (NSIP), Prince Abdulkareem Onyekehi, the Provost, College of Agriculture, Ahmadu Bello University (ABU), Zaria and a other inductees into the Guild.

Defending the choice of the latest entrant into Kings and Kingdom Africa Hall of fame whose vision/mission is aimed at promoting inclusiveness in good governance, peace, education and conflicts resolution, the Founder and Chief Executive officer, Alfa Global Impact Initiative, Comrade Ameh David Noah, said, MC Casino was recognized after a painstaking research for the award, as “one of the few Comedians who have put in a great effort in their campaign against immoral acts and social vices in society, particularly cultism, human trafficking through their crafts towards a better society.

Responding, Osarenkhoe Lawrence
with a new look powerful moustache, described the award as a source of encouragement to him having lost a fortune for promoting good moral values as a skit maker and content creator through his Comedy shows, as apposed to promotion of immoral act either as an on Air Personality (OAP), social media Celebrity or while performing on stage.

Speaking further, MC Casino urged “the youths not to give up on their talents, skill, gifts and focus as well as improving on their endeavours. According to him, “There are times we produce video Comedy skits, preach good morals, speak against bad governance and discourage prostitution, which sometimes cost the sum of N200,000. 00, you won’t get much views and shares on social media. But if you produce another video with a pretty girl, with a very attractive breasts, showing her cleavage, if even sometimes I do not talk, I could get 10 million views or 55 billion shares.

“The most painful part of its is that some people you look up to as role models in society enjoy watching it…If you are not a man of will in this business, preaching good morals become a difficult task to sustain because immorality and entertainment are first Cousins”.

As MC Casino, decked with his iconic pair of sunglasses and a sense of direction as well as enthusiasm, rose to accept the coveted honour, said, “Sincerely, some of us that are not too conscious of money, but have decided to do the right thing by directing our creative prowess though this lonely path, you have to watch your back, against the people you are defending or fighting for”.