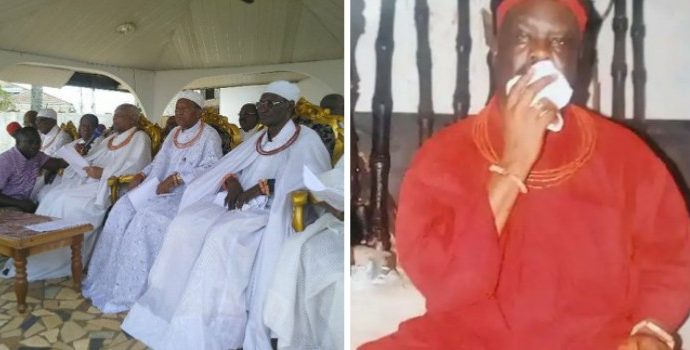 Recall that Osemwegie had unlawfully crowned himself as the Ogiamien of Benin Kingdom in 2015 and was thereafter arraigned in court, but the State government pardoned him after an apology to Government.

But the Chiefs on Thursday, faulted the Government pardon granted to him without ‘proper consultation’ with Oba of Benin palace before the withdrawal of the criminal case.

The Dukes and Chiefs in a joint statement signed by Iyase (Prime Minister of Benin), Chief Sam Igbe, Chief David Edebiri, Chief E. Oliha (Oliha of Benin), Chief I. Edohen (Edohen of Benin), HRH Edomwonyi Ogiegbaen, Enigie (Duke of Egbaen Siluko), HRH Ibie Okhionkpaimwinyi, Enogie (Duke of Iguogbe and Eight others, declared that the Benin throne is not aware of the demise of the Ogiamen title which remain Osarobo Ogiamien.

The Chiefs and Dukes described the crowning of self by Arisco as the Ogiamien as sacrilegious behaviour against the Benin Customs and Traditions.

The Iyase of Benin, Chief Sam Igbe who read the text on behalf of the Benin throne, recalled that Osemwegie and his cohort had been adjudged enemies of the Benin palace and the Benin people in general.

He stated that the withdrawal of criminal charges against Osemwegie and his by the State Attorney-General and Commissioner for Justice, necessitated the reaction after the court case had been struck out, amidst rejection and anger by Benin people at home and diaspora.

“We the Benin Chiefs and Enigie will like to reiterate, that the said Mr. Rich Arisco Osemwegie and one other committed a sacrilegious offence against the Benin Customs and Traditions and have been adjured enemies of Benin palace and the Benin people in general.

“The Edo State Government had withdrawn the said criminal charges against Mr. Rich Osemwegie, but after due consideration, we hereby demand that Mr. Rich Osemwegie should tender unreserved to the people in at least three national Newspapers and pledge his unalloyed loyalty to our only and indivisible Benin throne which is the Oba of Benin. This apology should be made within a reasonable time”, the statement said.