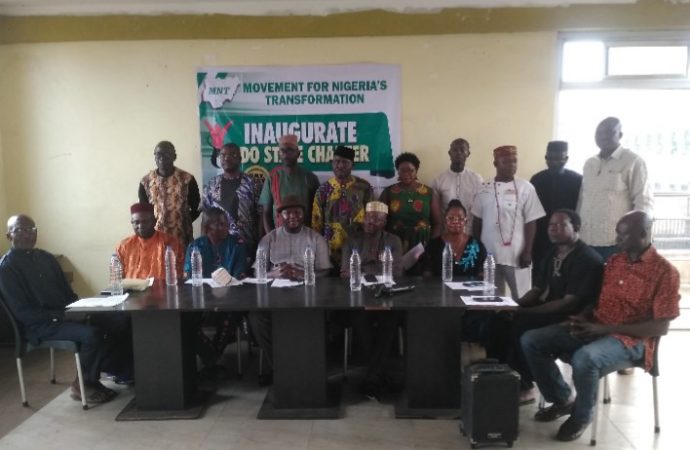 The odd over turn of events, ranging from the turbulences and contentious issues surrounding the 2023 general elections in Nigeria, engaged the minds of stakeholders across political leanings, professional groups at the weekend in Benin City, Edo State Capital.

The platform for projecting the nation from a thorny path and double-speak by politicians, rested on the shoulders of a civic advocacy group — ‘Movement for Nigeria’s transformation’ (MNT). This is what formed the integral part of discussion.

President of the Movement for Nigeria’s transformation’, Comrade Victor Ogba, laid the groundwork at the brief ceremony shortly before he inaugurated the state chapter of the body.

In his remark, Ogba, who lamented some of the challenges that are facing the Country, urged the citizens to stop agonizing over the state-of-the nation without doing nothing to change the narrative.

He urged the electorate to stand out to either provide leadership or support credible and democratic leadership that would direct the nation to the path of progress in a bid to check the pervasive national apprehension, ahead of the forthcoming general elections.

According to him, “MNT represents the voice of every Nigerian and has resolved to engage every contestant in the election. They must tell us that they have to show and the agenda they have for Nigeria.

“We can not be spectators in our own affairs and continue to watch out for gladiators.

On his part, Comrade Kelly Ogbaloi, who delivered a lecture at the ceremony, described Nigeria’s electoral terrain as drowsy and unpredictable.

He challenged MNT to be enlisted into the campaign against ‘divisive and ethnic politics’, predicting that Nigeria will make much progress when leaders across the various levels of governance put the interest of the public above self interest.

Ogbaloi, the Chairman of Labour party (LP) in Edo State, took a swipe at the ‘side-rocking anti-corruption’ drive of the federal government led by President Muhammadu Buhari.

Speaking on behalf of the State executives of Movement for Nigeria’s Transformation’ group, Comrade Adolevbo Haruna, charged members of his team to be true change agents, adding that the task ahead of them is enormous.

Haruna, who is the State Coordinator of the group, appealed to Nigerians to “wake up to their responsibilities to make the nation great.