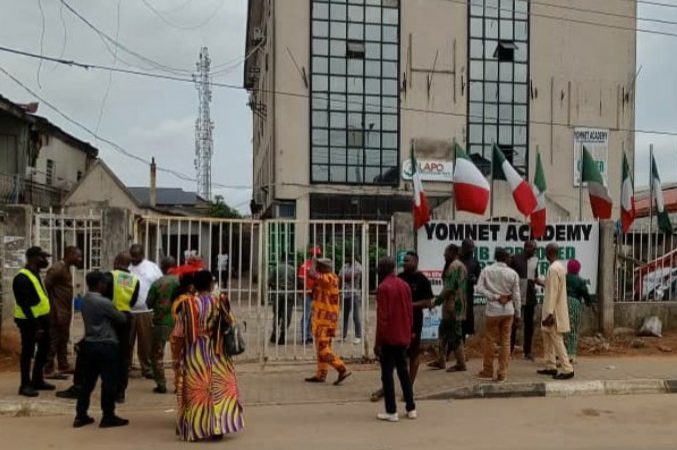 He was allegedly shot dead by yet-to-be identified gunmen who stormed the venue of Edo South PDP Senatorial parallel primary election for 2023 organised on Monday in Benin City where vehicles and other valuable assets belonging to delegates and residents of the area, were vandalized by the hoodlums, after gunshots.

This was shortly after four journalists on election duty were arrested by armed police operatives attached to the police Command at an event Centre, adjacent the Benin Airport where Hon. Omoregie Ogbeide-Ihama was elected as the Senatorial Candidate.

According to reports, the journalists, Sunny Ohioze of AIT with his cameraman, Deborah Coker of the News Agency of Nigeria (NAN) and Mr. Osamuyi Ogbomo of ITV/Radio cameraman were allegedly arrested, whisked away from the venue and detained for hours.

The arrest of the quartet, was said to be at the behest of the head of the Edo Security Network, Col. Kole Oshoriamhe Omomia (Rtd) who replaced CSP Yusuf Haruna (Rted) barely one week ago.

It was leant that the journalists were pushed into a waiting vehicle and taken to the Command, Intelligence Rapid Response Squad at Oko Central in Oredo Local Government Area of the State where they were interrogated by security operatives who took their statements taken under caution before they were left off the hook after some hours,according to reports.

One of the journalists, Deborah Coker of the News Agency of Nigeria (NAN), lamented their ordeal, alleging that they were been persecuted unnecessarily by unnamed State agents who resorted to coercion to undermine Press freedom.

Spokesman of the Nigeria police in Edo State Command, SP. Kotongs Bello, confirmed the arrest of the four journalists, however said had been released.

But the police spokesman further said, he is unaware of the alleged murder of the popular politician, adding that his office has not been briefed of the murder incident.

Meanwhile, results of the PDP senatorial primaries from the three senatorial districts of Edo state are:

Pascal Ugbome got 140 votes to defeat Tony Ezekiel and Wilson Osigwe who polled 11 and 47 votes respectively in the faction that is loyal to the National Vice chairman of PDP, South South, Dan Orbih, while, Mrs. Victoria Edelokun was returned unopposed in governor Godwin Obaseki’s faction.