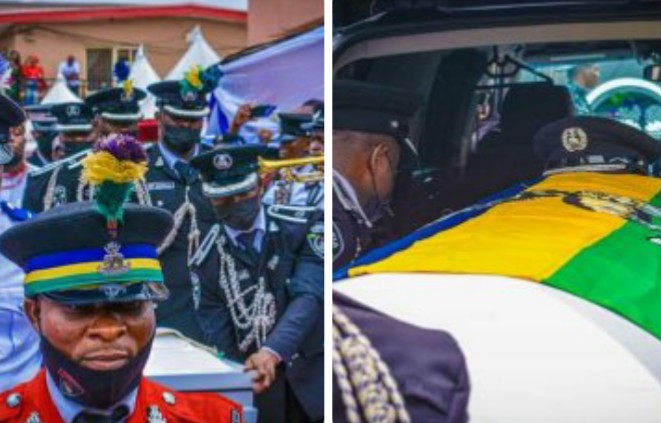 The remains of Late Senator Arthur Nzeribe and Deputy Inspector General (DIG), Dr. Joseph Egbunike have been laid to rest.

Egbunike, was DIG in charge of Police, Department of Force Criminal Investigation Department who slumped and died in his office in Abuja on Tuesday March 8, 2022.

Nzeribe body was laid to rest on Saturday in Oguta Local government Area of Imo State while Egbunike, was buried on the same day in Anambra State, South Eastern Nigeria.

The second Republic politician who died on Sunday March 6, 2022 at the age of 83, represented Orlu Senatorial district at the Senate between 1999-2007.

He was suspended Nzeribe indefinitely a former Senate President, Anyim Pius Anyim over an allegation of N22 million fraud in November 2002.

The governor of Anambra State, Charles Soludo was among the dignitaries who paid final respect to
Egbunike home town in Onitsha.

The Governor in a tribute, described the late DIG as a huge loss and prayed God Almighty to grant Egbunike’s family and Anambra people ‘the fortitude to bear this irreparable loss’.

Soludo wrote, “”Today, I joined his family, friends and the good people of Onitsha to pay a deserving final respect to an illustrious son whose life was of utmost impact to humanity.

“I pray God Almighty will grant his family and ndị Anambra the fortitude to bear this irreparable loss. May his soul find eternal rest in the bosom of the Lord! Amen”, he said.