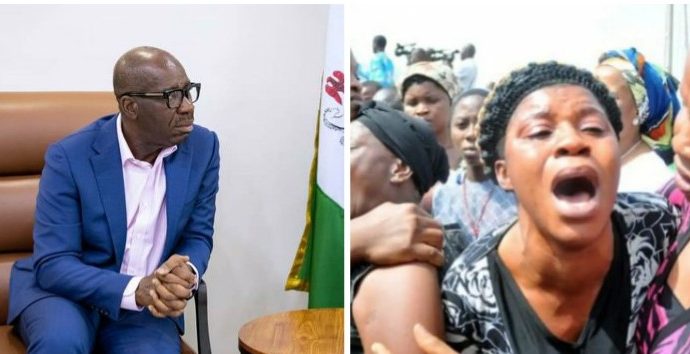 Governor Godwin Obaseki of Edo State has met with family members of a farmer whose mouth was reportedly slaughtered by suspected herdsmen in Odiguetue Community, Ovia North East Local Government Area of the State.

57-year-old Izete Jeremiah was reportedly shot in his mouth by gunmen on April 7, 2022, had been abandoned at the University of Benin Teaching Hospital (UBTH).

Mrs Mabelle Jeremiah, the wife of the victim, said her husband requires the sum of N446,000.00 excluding other charges to procure a jaw plate surgery for the breadwinner of the family.

On Wednesday, the Governor received a detailed briefs from family members of the victim who can neither eat with his mouth nor speak after unfortunate incident, at the Government house in Benin City, the State Capital, following an appeal made by his wife who alleged that her husband now feed from a pipe that was fixed through his nostril.

A dependable source who accompanied Izete family to the private meeting, which was at tr instance of Governor Obaseki, told our Correspondent that situation is being handled by the Government.

He hinted that the Governor said he was deeply worried over the incident, adding that the his “words were reassuring”.

He said, “we hope that things will get better soon. The Governor’s words were reassuring”, and do hope that the farmer will live a normal life again”, the source said.

But did not provide further details.

During her previous interview with newsmen, Mrs Mabelle Jeremiah wife of the wounded farmer, appealed to the State government and kindhearted individuals for financial support to undergo surgery after the ailment has drained their family purse.

“We have been at the hospital since April 7. My husband can’t speak and eat, except through the nose with the aid of the pipe. We have spent all our savings and even borrowed. We don’t have money now; even the drugs they gave us were bought by relatives of patients through contributions”.

“We have spent over N500,000 excluding hospital bill, now he has to undergo surgery on the damage jaw so that he can eat and talk and they need over N800,000.”

“So, to buy the artificial jaw plate is about N500,000; they haven’t told us the cost of the surgery, and we still have a hospital bill to pay. We need help from well-meaning individuals to be able to carry out the surgery. ”

“I am also calling on governor Godwin Obaseki to come to our aid so that my husband can get well and take care of his family. Things have been very difficult for us, ” she said.

A Matron in charge of the Ward where Jeremiah is receiving treatment at the UBTH also corroborated the claims of Mrs. Jeremiah when our reporter visited the health facility.

The Matron who didn’t want to be mentioned in print, alleged that the patients are soliciting for funds to buy the jaw plate as well as funds for surgery.

“Also, they need money for the surgery and drugs so that the surgery can commence for him to be able to speak and eat”, she said.

Some rural dwellers in the affected areas have been denied access to their farms by the armed bandits despite assurances of safety of lives and property of the people by the law enforcement agency.