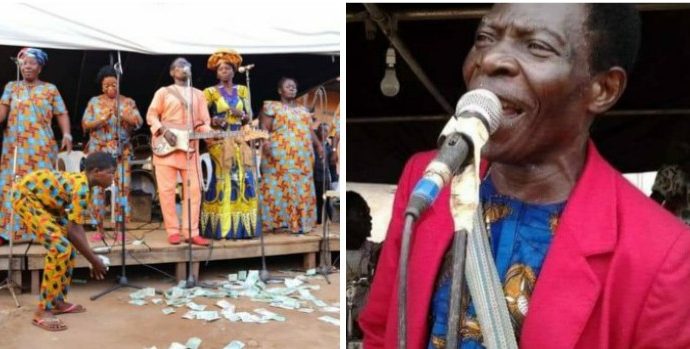 The Oba of Benin, His Royal Majesty, Oba Ewuare II has demanded the whereabouts of the eldest son and daughter of Arala of Benin, Chief Saka Osula whose death occurred on Sunday morning.

The rhetorical question by the King on Wednesday, rattled members of Osula family who were at the Oba of Benin palace to formally inform the monarch of the passing of the Benin Chief with ‘largest family music band’, in line with ‘Benin customs and traditions’.

It was learnt that one among the Children of Chief Osula, held his breath a while and thereafter informed Oba Ewuare II that the eldest son and daughter of the departed musician are abroad.

The family member who spoke on behalf of the group, however promised to return to the palace and communicate their father’s burial rites to the palace for ‘proper guidance’.

On Monday May 16, business owners around Lagos street and Butcher streets, Forestry, Mission and some part of King square shut their shops and outlets in honour of Osula, fuelling a row among Nigerians in the social media Community.

The following day, a lavish reception was held in honour of Chief Osula for guests and sympathizers, friends and well-wishers who besieged his residence to condole with the family and pen down their tributes.

The deceased who was song writer and producer who lived at his maternal home in Lagos street in Oredo Local Government Area of the State, before he passed at 78.

Renowned for his ‘Omwanagbon’ (somebody) music track, Osula, the Polygamist with a class as one of the most travelled artist.

He had waxed several music albums to his credit, decades after he shot himself to the limelight.

His small stature and preference for his salmon-pink suit and red loafers, singled him out of his contemporaries.