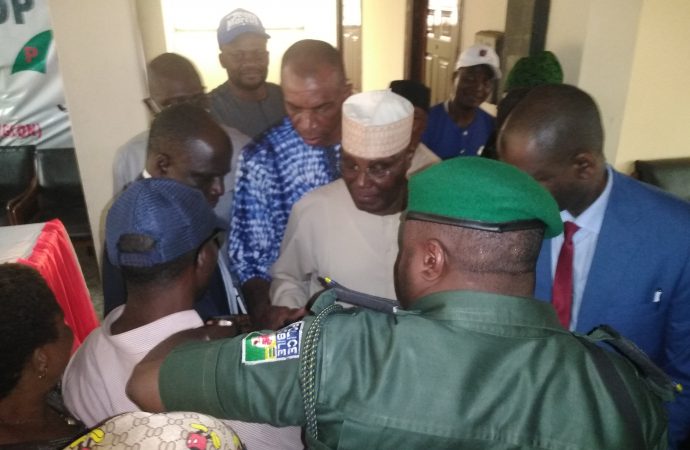 A group of visually impaired persons gushed out their anger disappointingly at Edo Secretariat of Peoples Democratic party (PDP) on Friday in Benin City, the State Capital over the cold shoulder Alhaji Abubakar Atiku gave to them to lean on.

It was leant that the leader of the group who used a white cane to scan for obstacles before locating Atiku, Presidential aspirant of Nigeria’s main opposition party, sat briefly after addressing Edo delegates to forthcoming party primaries.

TheNewspad withheld the leader of the group’s name because other particulars eye witness report, is sufficient for public disclosure.

But there was a drama after the former Vice President told the delegates not to fret and that he has ‘letters for all the delegates’, amidst laughter.

After Atiku’s announcement, jolted the visually impaired persons, immediately file-out and began to sing his praises.

The PDP aspirant and immediately walked away from the scene in the presence of onlookers and delegates who converged on the 3rd floor of the building.

Upon sensing disappointment, the defiant members of the group, walked in solidarity along with the aspirant who was led by his close aides not not tip over at the stairs.

It was further learnt that they finally gave up on their misadventure after Atiku who was clad in a brown floated Safari, allegedly lost empathy by jumping into a steaming black Spot Utility Vehicle (SUV), parked in front of the party secretariat and zoomed off without saying goodbye.