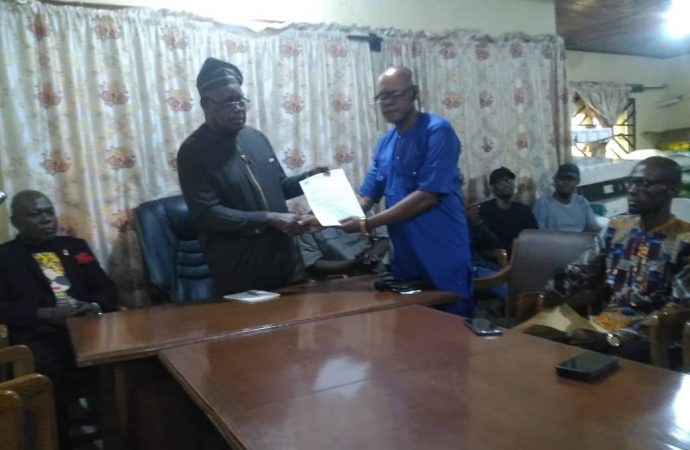 A popular businessman, Elder Pius Omofuma, has been named as the Nigeria Union of Journalists (NUJ), Edo State Council’s Patron.

The investiture Ceremony of the award recipient (Omofuma) — Chairman and Chief Executive officer of GT Plaza Conglomerate, has been fixed for February 2022, according to NUJ leadership.

Comrade Festus Alenkhe, Chairman of Edo NUJ Council disclosed when members of his executive paid Elder Omofuma a courtesy visit on Friday at his residence in Benin City.

Alenkhe, described the Entrepreneur as a beacon of hope, and a consummate businessman who has expressed integrity though humility and philanthropy.

“We are journalists, and when journalists pick up an individual for recognition, it goes fast…We hold you in high esteem…”, Alenkhe said.

He also recalled his wise counsel of the elder statesman during his travails before fortune smiled on him.

In his acceptance speech, Elder Omofuma, flanked by management staff of the company, expressed gratitude to the union for the honour as NUJ Patron and promised to partner the union.

In a brief remark, Mr. Agharese Idubor, former President, National youth Council of Nigeria (NYCN), urge the leadership of the union in the State to prioritise the welfare of its members and work as a team.

According to him, “Work hard to keep your team together. Keep moving as you are moving, but if anybody wants to drag you back, I do not pray for that happen, keep moving”.

He also charged journalists to perform their during with high sense of diligence and responsibility despite the economic hardship in order not to dent their reputations.

Featured photo caption: Comrade Festus Alenkhe presenting a letter of appreciation to Elder Pius Omofuma during the visit on Friday in Benin City.