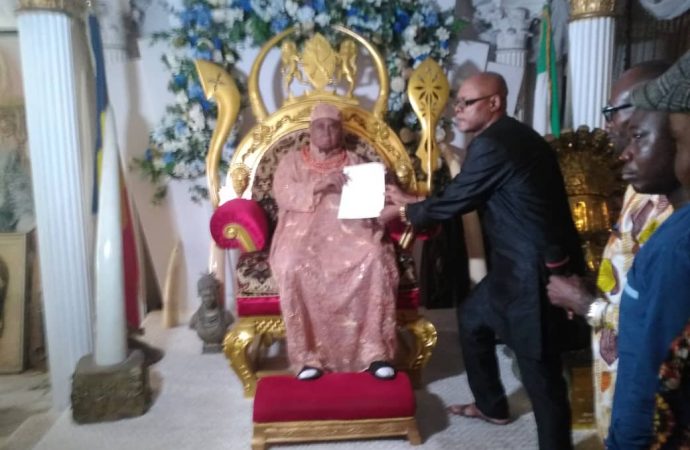 Journalists in Edo State on Wednesday commended the Esama of Benin, Chief Gabriel Igbinedion for his support to the Union, with a charge to engrave his name at the Council’s secretariat.

The chairman of Edo NUJ, Comrade Festus Alenkhe made the appeal when he led the newly elected executives of the union paid Igbinedion who is the grand Patron of the union a courtesy call in Benin City.

He recalled said the aim of the visit is to notify the Octogenarian of the change of guard in the leadership of Edo NUJ and reaffirm that he (Gabriel Igbinedion) as the grand Patron of the union.

“Our mission is improve on the welfare of journalists across the 13 Chapels of Edo NUJ…When I checked the record, I discovered that our father is the grand Patron of Edo NUJ.

“We want to reaffirmed that Esama is the Grand Patron of NUJ”, Alenkhe said.

Responding, Chief Igbinedion said the union should count on him for the necessary support as he would stand as a pillar of support to the executives and its members.

He disclosed that the large number of Journalists who accompanied the newly executives on the courtesy on him, shows that the chairman and his executives are truly the choice of the practicing Journalists in the state.

According to the Benin high Chief, “You have already laid the foundation and you have started well. I have heard you. I will be a pillar of support to you”, he stressed.